An introduction to me and my recent history.

I am a 68 year old Yorkshireman now living in SW France. We moved here in 2002 and live in the middle of the Blaye wine region. The house is surrounded by vines.

I have been shooting seriously since 1975 but only started to reload once we arrived in France. This was mainly because in the UK I could only shoot shotguns.

Before leaving the UK I did spend 2 years in the Royal Naval Reserve and 9 years in the Territorial Army where I spent a lot of time both training people to shoot and shooting for the Company and Battalion shooting teams. That was a great time with HM Government paying for my ammo!!

Since arriving in France I have been able to expand my passion for historic weapons and because of that I have been forced into reloading obsolete calibres. In the future I hope to post about all of them from .577 Snider to .476 RIC Webley and also a few ideas that I have had along the way to either save money or improve on an existing idea.

So, for starters, lets see if I can add a photo to this post………. 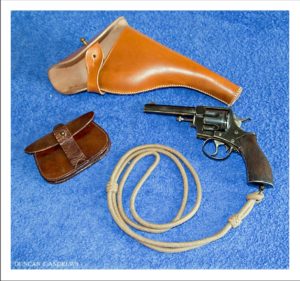 Well that seemed to work……….My RIC Webley Mk.I in .476  which is marked E.P. which is for Egyptian Protectorate and not, as some think, Egyptian Police.

I also have been looking at Powder Coating recently but to date my efforts have been a miserable failure with the main problem being getting the powder to stick to the bullets. I cannot get Harbor Freight powder here in France unless I buy it through Amazon and the price would be about $86 a pound!! I bought some from a company in the UK and that is the powder that wont work. I obtained a copy of the Product Data Sheet from harbor and sent it to the UK company. They said that the Harbor powder contained a ” chemical nasty” which is banned in Europe but I don’t know if that is the problem. I sent their tech dept some cast bullets to test and I am waiting for their report. More of that later.

Just a point that I should make before I post more…….Being a Yorkshireman I look for a bargain or a less expensive way of doing most things. That is because, according to some, a Yorkshireman is like a Scotsman but with all the generosity kicked out of him!

A dyed in the wool Yorkshireman now retired and living in SW France ( on missionary work!) where I enjoy Shooting, Photography and the local wines.