Well guys, after a 2 day Tactical Shotgun Class at Front Sight in Pahrump, NV last Monday and Tuesday, I have solidly learned how to run my Browning Auto 5 shotgun in a tactical manner. It is now my go-to 3-Gun shotgun. The 2 Day Class is the first two days of the 4 Day Class, the only difference being you shoot more and you get to take a skills test at the end of the 4 Day Class and 300 vs. 500 rounds. 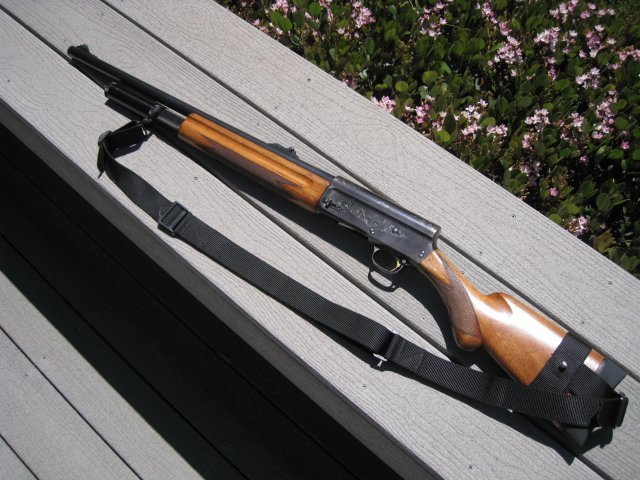 I had already done three other shotgun classes with my M500, two 2 day classes and one 4 day class, so I knew what I’d be doing with it during the class, and I also knew how to dial the gun setup in before I went.  Pretty much nailed the setup, a couple of minor changes but nothing big.

As far as running the gun, It is so much faster than a pump gun it is scary. It is also much faster and easier to operate than any of the other semi-autos I saw at the class.  Berettas and Benellis are nice shotguns, but I can beat them to first shot every time. At $1300-1500 it is hard to understand why they are chosen over a over 120 year old design that just works great for half the price!  I had one minor problem with the gun, and that was at the end of the first day the rear sight fell apart.  I was lucky to find the $22 screw that fell out and now the whole sight is permanently glued together with Red Loctite!

I had no shooting induced malfunctions in 300 rounds. You do most of the same things to operate it that you do with a pump except there are some things you do that are greatly simplified. Clearing malfunctions is easy as all you do is rack the bolt handle. The bolt handle is kind of small in the tactical sense, but after you get used to it, it works just fine. You actually use it less than you’d think as about the only time is unloading the gun and clearing malfunctions. I have an extra part so I may fab up something a little bigger in the future, but it is down the list of things to do.

The most glaring operational difference is loading. Any A5 made after 1963 has a two piece shell carrier/lifter and has the “Speed Feed” feature.  With an empty gun, bolt open, you stuff a round into the mag tube and remove your thumb, and as soon as you let go, the gun automatically feeds the round into the chamber and closes the bolt ready to fire.  This happens “Right NOW!” and really has to be seen to get the full impact of just how fast it is. You can also port load and drop the bolt manually but this is much slower, so why bother. Loading the rest of the magazine is the same as any other tube fed gun. This gun has a Briley Magazine Extension and capacity is 7+1. Normally they are 4+1, hence the name “Auto 5” 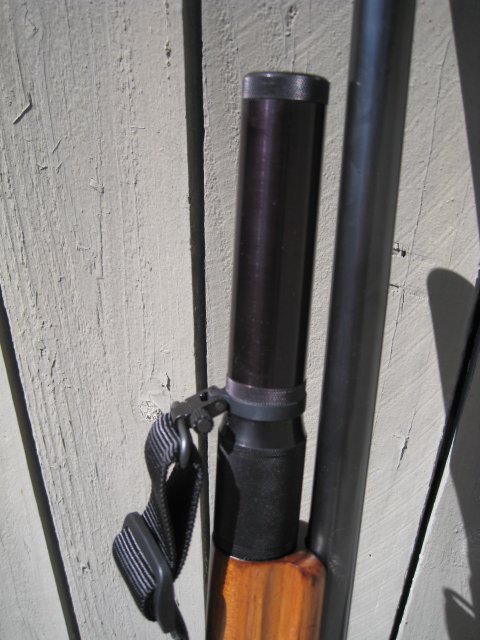 I also installed a 1.5″ wide sling of my own design.  The gun is setup so I can attach the sling in several different ways which covers just about every Sling Carry Position depending on how I use the gun. I can carry Conventional Muzzle Up. African Carry Muzzle Down, or Two Point Cross Body Carry Muzzle Down which I prefer for tactical use as it is quickest to point in from that carry position. It can also be slung across my back for running, which I don’t do much any more. 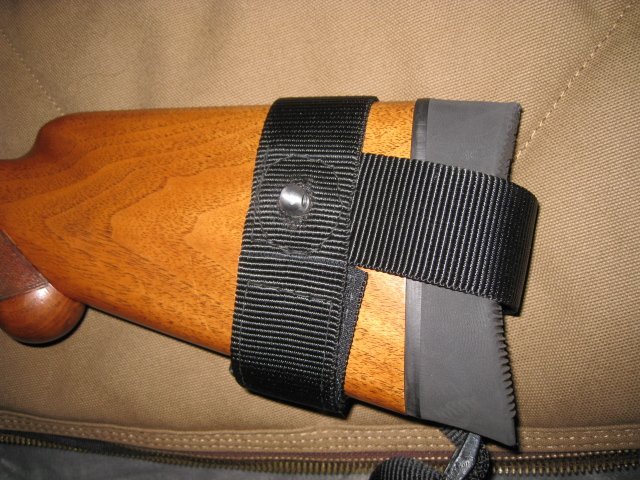 The safety on the Browning is in a very advantageous location at the rear of the trigger guard and if you forget to push it off during presentation, your second pad is right atop it so it can be pushed off without removing your finger from the trigger.  One thing they teach in both the rifle and shotgun classes at Front Sight is “Safety First!” Meaning when you start to move the first thing you do is dump the safety. If you don’t, you will invariably forget it, and when you pull the trigger nothing happens. That can mean, “you lose the gun fight!” 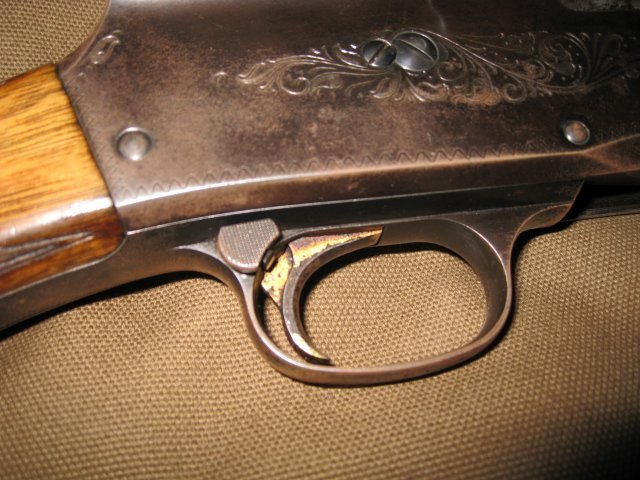 I had the gun setup with a Browning Buck Special Smoothbore Barrel with open rifle sights so I could shoot birdshot, buckshot and slugs interchangeably.  The gun posted a three shot group of 1 x 1.5″ at 50 yds with Federal slugs while sighting it in so I knew it would be good with bird and buck.  It patterned buckshot at about 15″ at 15 yards which is not great, but good enough for what I need buckshot for in these classes. My M500 with the Vang Comped Barrel shoots buck inside 7″ at 25 yds! which is exceptional.

I did experience some muzzle rise between shots so the barrel is going to Vang Comp this week for porting and lengthening of the forcing cone. The gun is still super fast cycling and follow up shots broke as soon as the front sight came to bare on the target. The front sight has a green fiber optic that is pretty hard to miss in the direct sunlight of Pahrump, NV. It is kind of like shooting with a red dot optic as when the dot is on the target you pull the trigger.  No need to study the sights, it’s a shotgun and bullet placement is not critical. With buckshot you have 8 or 9 of them going down range so no need to be picky about exactly where one of them is going. Green dot on the target somewhere, and let fly!  It’s a Mental thing! 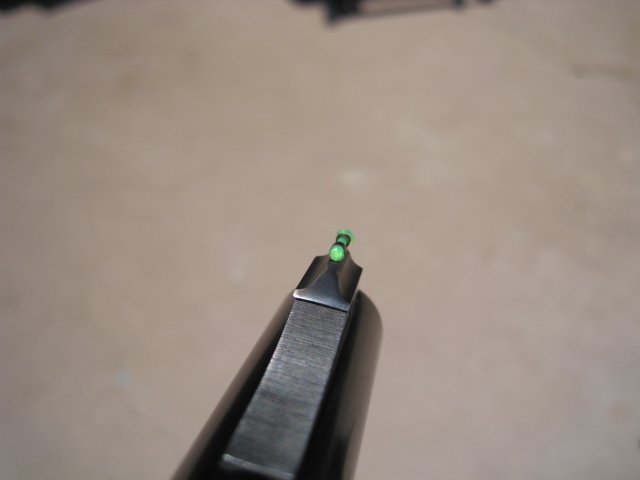 An example of how well this gun performed was during the Port Loading Drills. Normally you start with an empty gun.  On the go command you drop a round in the ejection port, close the bolt and fire at a target, then reload the same way and fire at a second target and then reload and you’re done. You have 4.2 seconds to accomplish this task.  I can usually do pretty well with my M500, however with this gun I can use the “Speed Feed” feature and load in half the time.  What this amounts to is I am done before you get your second shot off. Not bragging here, it is all about how fast the gun runs.

There is also a part of the test where you shoot multiple targets.  Starting from the ready you have 1.6 seconds for 2 targets, 2.1 seconds for 3 targets and 2.6 seconds for 4.  I can easily do 2 and 3 with the M500, but 4 has eluded me as running the slide is slow compared to a SA.  I can do it no sweat with this gun! Bang, bang, bang, bang!

It is just that much faster!

I have about $650 in this gun right now and it is definitely a winner. I did a redo on the wood and a cold blue job on the receiver which I pretty much rubbed off at the class, but it is easy to retouch. There are plenty more like this one out there waiting to be cleaned up and put in service. Just make sure you get one that was made after 1963 as before that they have the one piece lifter and are a PITB to load. Parts are readily available on eBay and a complete Disassembly and Reassembly video by Art’s Gun Shop is on YouTube.

These guns are more like engines than guns, they are Machinery! They are Mechanical Marvels and easy to work on once you get the hang of them. You do need the 4 Thin Browning sized screwdriver bits as all the screws have narrow slots and are easy to goon. Other than a few minor parts they are hard to wear out and seldom will you see one that has been shot that much to begin with.  I have a pristine 1964 model Light 12 that was bought new by my favorite Uncle and has less than 200 rounds through it! As long as they are cleaned and lubricated (30 wt. Motor Oil is what JMB recommended) they will run for a really long time. This gun is a 1963 Model Light 12 and it will easily outlast me and probably all the rest of you and your kids as well!

On another note: I also have Hastings Rifled Barrel for the gun and will be doing a lot of work with slugs in the coming days, weeks and months.  Watch for more on that.